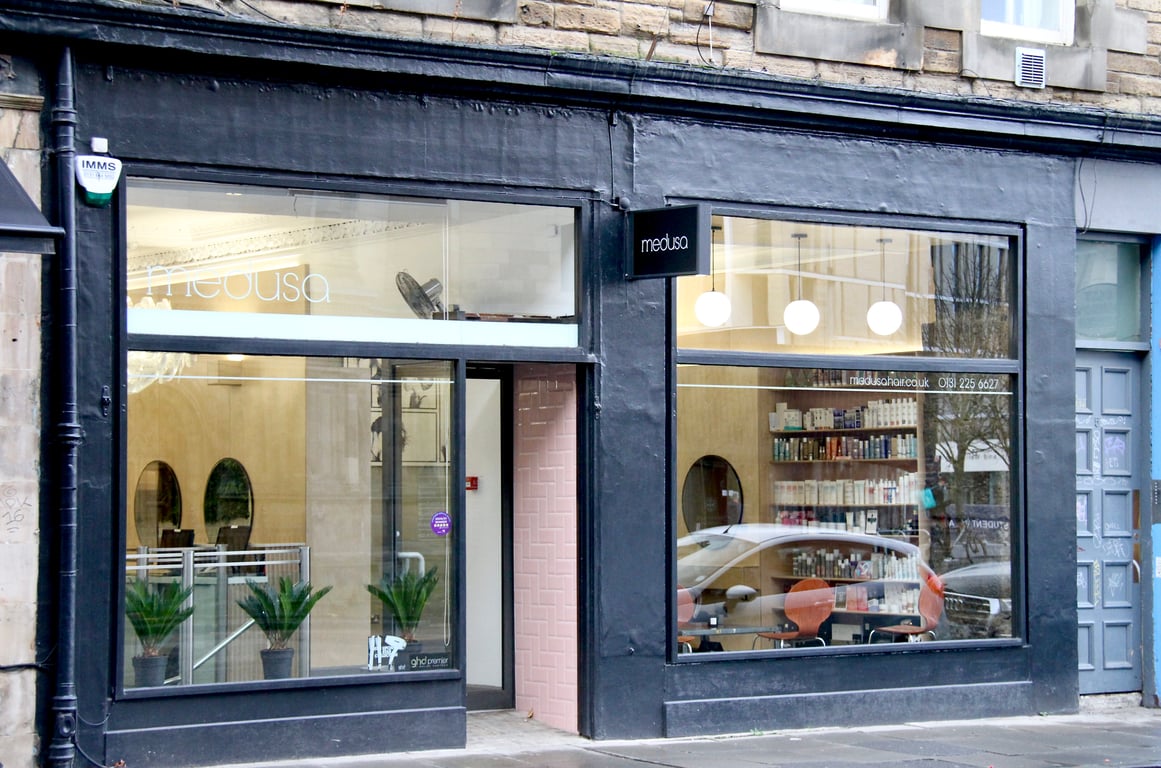 Part of the Medusa Group on salonspy.

Medusa like to do things differently - we're an award-winning Edinburgh hairdressing salon consistently creating new styles at the vanguard of fashion, but all the while exuding a genuine warmth and welcome. And that's because we obsess about hair, and equally, about how to make every minute of your time with us memorable (for all the right reasons). Sit back, have a cappuccino, have a wine, or have a funky organic tea if you fancy. From the second you step in the door, we want to make you feel at home, and get to know you, your hair and how you want to feel in your new hairstyle.

No rush, no fuss, no problem.

Let us make your hair rock.

Always have a great time. Staff are fun and chatty and I come out feeling fabulous after my cut and colour.

Jenna, a graduate hairdresser at Medusa salon coloured my hair today. I'm over the moon with the treatment I received (lovely girl). Also, the colour is great, will definitely be booking in again in the near future. 👍

Jenna, a graduate hairdresser at Medusa salon coloured my hair today. I'm over the moon with the treatment I received (lovely girl). Also, the colour is great, will definitely be booking in again in the near future. 👍

I had a great experience. Zara was friendly, accommodating and bold with her advice. I needed that!

I haven't been to a hairdresser for years, (I've had a friend cut it at home. Alas...she has cancer.) so I was a bit apprehensive selecting. -In earlier years I felt the stylist was practicing on me, as if curly hair customers were few and far between, at least that's what it looked like afterwards.

However I couldn't have picked a better moment to walk through Medusa's door. Not only were they able to deal with me right there& then but I was attended to by possibly the most accomplished stylist of curly hair around.

In decades gone by, my hair was cut by a friend, Peter Kozub RIP, (one of 'Brian Drum's' top people) included among his famous clients was Princess Margaret. Peter toured the world with the band "Simple Minds". He also won many accolades in style shows around the UK. In other words Peter was great.

Nevertheless, credit must be given where it's due, so it must be said that Medusa's stylist sorted out my unruly mop better than I can remember Peter doing.
Unfortunately, I thought I picked his name up as Alice, but I don't see it listed. He is possibly Italian and looks younger than he must be.

Be assured though, if you have curly hair needing attention this is a salon where you'll be in safe hands.

The hairdresser* Cerys* was so nice and very professional, and the receptionists were all kind and welcoming.
I enjoyed myself there !
I highly recommend.

I love my new hair highlights by Alex! He did a fantastic job!!! I have been highlighting blonde for some years now and his work is the best this far! So happy I did my hair with him. He matched the blonde highlights to my skin tone perfectly!! Thank you so much Alex xx

I was pretty apprehensive about going. My hair is very important to me. I have always had my hair cut in Spain and I was worried that I wouldn't find someone as good as him. But Laura not only met but exceeded my expectations. I loved the way her suggestions were never imposing. She respected and was keen to hear my opinion. I love my new hair and will not hesitate to recommend them to all whom I cross path with.

Thank you so much!!

Fraser has been cutting my hair for years. I keep coming back because he is the best! He listens to what I want my hair to look like, advises and let’s me know what he’s going to do beforehand. I look forward to every visit and have always been very pleased with how my hair looks and feels after a new hair cut. The salon team are always welcoming, kind, and consistently excellent at what they do. Thank you Fraser and colleagues for another wonderful hair cut.

Today I had Jenna, who is normally at Bread st, working on my hair. My hair is extremely fine, especially at the top, but Jenna gave me a flattering cut and slight curl, which made it have way more volume, and suits me much better. Was a really good experience and she gave me some good recommendations on the best products for fine hair. Very friendly and welcoming!

Alex did my hair, he gave me a totally different style and colour but I am getting used to it and
Getting to like it.

A warm welcome at reception. A bright airy salon. A super haircut. They have a fancy coffee machine which l did not sample but will next time. Happy to return and 'recommend. Thanks

Service
Value
Result
Cleanliness
Atmosphere
very bad experience and i would advise no one to go there
Natalie Demduri - 8th Jun 2022
1.00
Appointment verified by SaloniQ Software

Excellent service so pleased with my hair

Great haircut and colour by Eilidh yesterday! Listened to what I wanted and did a lovely job. Highly recommend both the salon and stylist.

Fraser has done a lovely job of my cut and blow dry ! I was feeling quite down in the dumps and he’s boosted my mood with a lovely haircut !! Thank you 😊

Laura did a wonderful job with my hair and the salon atmosphere was fabulous as always.

Great as always! Lovely wee buzz in the salon on a Saturday

I'm never disappointed when visiting the salon, in fact, quite the opposite! My experiences at Medusa have always been excellent. Fraser listens to my (many) ideas when it comes to my hair, offers honest and trustworthy advice and most importantly always leaves me very happy with my hair result! Due to the amount of hair I have, I am in most of the day and I always feel very well looked after.

Zara put my daughter at ease straight away and listened to what she said . Zara did an excellent job on Ailsa’s hair and she can’t wait to go back, her friends are going to try now.
All the staff we very friendly and attentive and offered my refreshments whilst I waited. Great experience.

Once submitted, your claim will be reviewed by the salonspy team.

Can you tell us more about this salon? Update the relevant details below.